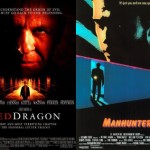 In the first episode of “Double Bill”, join hosts Joshua Humphrey, Mike Postle, and Brian Watson-Jones as they dissect the films “Manhunter” (1986) and “Red Dragon” (2002), both adapted from Thomas Harris’ beloved (at least in Mike’s opinion) novel “Red Dragon.” Which is the better adaptation? Why does Michael Mann love blue filters? And who, ultimately, was the better Dr. Hannibal Lecter?*