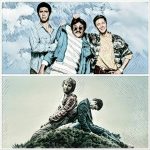 Leave your corpse-related phobias at the door–today we’re matching up Weekend at Bernie’s and Swiss Army Man. The 80’s buddy comedy and the 2016 (horror? independent? romantic comedy?) film utilize corpses as props, both for different purposes. Bernie is used as a social equalizer, allowing Larry (Andrew McCarthy) and Richard (Jonathan Silverman) to freely hob-nob […]